This short story is part 2 of a series of stories about a young boy who learns how to earn money. 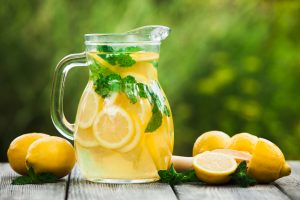 To Julio’s father, Mr. Julio, the idea of his son starting work was fantastic. He liked knowing that his son wanted to buy a present for his mom on her birthday. He thought it was lovely that Julio was willing to work for it.

So they set off to work. Mr. Julio had some wooden boards, a hammer and nails in the garage. He built a table to place the lemonade on. Mr. Julio and little Julio squeezed many lemons to make refreshing lemonade. They used their secret recipe which had lots of sugar, water and lemon, and a pinch of love since love makes all things taste much better. Julio painted a sign with the brushes and paints that his father had in the garage. He liked to draw a lot, so he was able to make a colourful sign that would attract all his neighbours to buy his lemonade. They did this one day very early in the morning after Julio’s mother had gone to work. Mr. Julio did not go to work and Julio did not go to school that day. They just worked on selling lemonade.

When the lemonade stand was ready, customers began to arrive. First came Mrs. Rosamund, an old woman who lived in a house very close to them. “What are you doing, little one?” asked the old woman. “I’m selling lemonade to raise money so I can buy a nice birthday present for my Mom!” the boy said with a smile on his face.

“Ah, it has been very hot lately. Please give me one of those refreshing cold lemonade glasses you have there.”  She was the first customer of the day.

Then Mr. Roberto passed by. He was a man who was always reading. “Oh little one, what are you doing sitting under the sun?” asked Mr. Roberto.

“I’m selling lemonade, Mr. Roberto. So I can buy my mom a nice present for her birthday” said the boy with a smile.

“Oh, then I’ll help you. I am feeling very warm, and a nice cool glass of lemonade would be very refreshing. But let me tell you a secret: If you want to give your mom a truly incredible gift, buy her a book!” He was the second customer for the day. One by one, all of the neighbours showed up to drink lemonade and soon enough, Julio was able to raise enough money to buy his mother a birthday gift. When Julio’s mother returned home, the boy and his dad acted like nothing special had happened. Julio’s mother did not suspect what the two of them had been up to. The next day, they again waited until Mom left the house for work. Once she had left, Mr. Julio and Julio went to buy the gift.

The hard part was deciding what to buy, but Julio had gathered enough money to buy something very nice. In the end, they decided on a bouquet of flowers, red roses and a box of chocolates. The day arrived and they were both truly excited. They woke Mom with breakfast in bed.

“Thank you very much for being so good to me, both of you, I feel so fortunate to have you.” said Mom.

“But there is more,” Mr. Julio said “Our son has been working hard so he bought you a very nice gift.” Then little Julio appeared with the bouquet of flowers and the box of chocolates.

“Son, I feel so proud of you, but the best present I could receive is to be your mother.”

“I love you Mom, I wanted to show you that I love you very much and I think that with this I can do that.”

“Yes, my son, but the most important thing is not the gift, but the love behind it. I feel very proud to be your Mom” the three embraced each other in a big family hug. It was a great birthday for Julio’s mother!