This is a short story about an alien who makes friends with a boy. 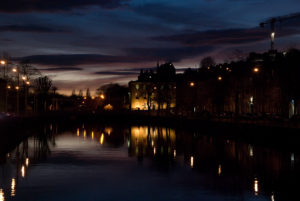 One warm summer night, Bobby was lying on his bed looking up at the ceiling because he could not sleep. It was his first week sleeping in his own room and he had not been able to fall asleep on any night because he was afraid. He was thinking about a lot of things while lying on his bed. He wanted to go to his parent’s room to tell them that he could not sleep, but he had already done that every night that entire week. Bobby was a big boy and he had to prove it! How could he prove it? By sleeping alone in his room. But he switched between being afraid of the dark to being bored. He wanted to play with his ball or other toys. He wanted to watch TV shows or listen to music. He wanted to do many things, but he knew that his parents would wake up.

While thinking about all these things, Bobby looked towards the window. The sky was so dark, full of stars that shone brought, so beautiful; some of the buildings he could see had lights on in some rooms, but most were dark and frightening. Bobby’s thoughts were interrupted by a green light that illuminated his window. The boy got scared and hid under the sheets. He had never seen a green light like that. This was exactly the kind of thing he was afraid would happen—some mysterious visitor arriving in his room! He heard the window open. Someone was walking in his room, through his toys, towards him. Who was it? He did not know.

“Good evening, Bobby,” said a weird voice. The boy did not respond because he was very afraid.

“Do not be afraid, Bobby, my name is Q and I’m from the planet Frox, I’m visiting your planet” the voice continued. Bobby was scared but he was a big boy, so he forced himself to be brave and took off the sheet to meet a being that did not look like a person at all. His head was very large and his eyes were totally green like slime. His body was very thin and small, like a child’s, but his head was immense.

“Who are you?” Bobby asked.

“Oh” Q replied, “I am an alien, a visitor from another planet; that green light you saw is from the headlights of my spaceship, which shine like the headlights of your father’s car.” While Bobby was talking to the strange visitor, he started to feel calm. He realized that the visitor was not bad or evil; he was just different.

“I cannot visit during the day because the sun hurts my eyes, that’s why I come at night but at this hour nobody is awake, I like to play a lot, but most of the children are sleeping.”

“Why do you want to play?” Bobby asked.

“My parents are sleeping too,” said Bobby, “but I want to play, just like you.”

“I have an idea.” said Q, “Let’s take a ride on my spaceship, what do you think of that?” Bobby knew that he should not trust strangers no matter how nice they seemed, so he hesitated. Instead, he had a long conversation with Q to get to know him better first. Eventually, he was able to see that Q was telling the truth, that he was a child just like Bobbly who really just wanted to play and explore. Bobby knew that his parents would be very angry if they found out, but he got on Q’s spaceship anyway, which floated next to his window radiating a green light.

“Why don’t you try driving the spaceship, Bobby?” said Q, “Let’s go to your favourite place!” Bobby did not know how to drive but Q explained that the spaceship was guided by the mind. He simply had to think about turning left or right, forwards or backwards and the spaceship would obey his thoughts. So Bobby thought of many places that he liked going to because he wanted to take his new friend to see these places. He could not decide where he wanted to go first! That’s how Bobby’s adventures began. Explore the rest of the stories on our site, and you may just find a couple of Bobby’s adventures hidden among them!