This story is about a boy and his pet dog. 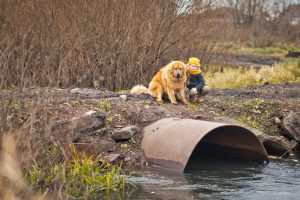 Scotty was a little boy who lived on a farm. His parents were farmers. They cultivated various crops and kept many animals. On the farm, there were bulls with big horns, cows that gave milk, roosters that sang at dawn, chickens that laid eggs, and pigs that played in the mud all day. Many animals were on that farm. But there was only one little boy, and that was Scotty. He was a very good boy, who helped his parents with their work, picked up the eggs that the chickens had laid, fed the chicks and milked the cows in the mornings with his father. Even so, the child felt very lonely; the little calves and chicks were always with their mother and they would not play with him. His mom and dad were always working. He wanted someone to play with, but there was no one else around.

Occasionally, the boy made his own fun by walking through the fields to reach a small river that was hidden among many trees and plants. When he felt very lonely, he walked to this place and swam freely among the fish that lived in the river. One day, little Scotty finished milking the cows and feeding the chicks. The boy was very bored, so he went to the river where he always played. But to his surprise, an unexpected visitor was drinking water from the river. It was a puppy, who was very small and very white. Scotty asked him: “What are you doing here all by yourself? ” But the puppy did not respond, he just approached the child as if he knew him. “You cannot stay here alone,” said the child, who took him in his arms and brought him home.

Scotty’s parents had already finished their work when Scotty appeared with the little puppy. Scotty told them about the puppy and they told their son that he should take care of it, but that he also had to go to the river every day in case someone came to look for their pet, or in case the puppy´s mother was looking for him. Scotty nodded. The boy called the puppy Lucky because he thought he had been lucky to find him. That night, he served Lucky food like the rest of the animals and made him a special bed next to his, just to give him company.

And so it was, but every time he went to the river, he spent hours there without anyone showing up. This did not bother Scotty at all, because, from the very first day, the puppy was very playful and liked to have fun swimming and running around. Scotty, who used to play a lot, enjoyed having a friend with whom he could play. It became a habit to go to the river every day after Scotty had finished feeding the chicks and milking the cows. They played until they were tired and no one ever appeared looking for the dog. Scotty asked the puppy daily about his family, but he never got a response. It seemed like the puppy had appeared by magic as if an angel had heard that the child wanted to play with someone and had given him Lucky as a gift. Today, Lucky and Scotty are taller and bigger, since they have both grown a lot. Lucky is no longer a puppy, but a big, strong dog. He is still very playful though. Scotty is no longer a little boy, but a man who has his own farm and works hard every day. But they never stopped going to the river to play every day, and they hope to continue doing so for many years to come.
e.