An original short story about a boy’s adoration of his father. 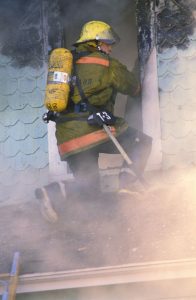 Little David loved his father very much. His father was a big and strong man with a thick beard and tattoos. His father was very intelligent and funny too. He was not afraid of the dark, of wild animals or of falling sick if he got caught in the rain. He was a superhero to little David. When David spoke about his father, most of all, he loved telling people about his father’s job, because David’s father was a fireman in the local fire department. As a fireman, his father’s job involved putting out fires in buildings and in the forests. He also helped to catch wild animals like snakes and raccoons that strayed into people’s homes. As a fireman, he also had to rescue people when they were stuck in vehicles after accidents, or rescue animals when they got stuck in trees or drain vents. Being a fireman was exciting work!

Sometimes, little David’s dad would come home with amazing stories of things that had happened during the day. Sometimes little David’s mother would say he was making things up for entertainment but his father promised that everything he said was true. Little David knew that when he grew up, he was going to be a fireman too. But he knew the job was dangerous, so he was determined to train himself up to be strong and big like his father. He wanted to protect and help everyone in his neighbourhood. So every weekend, when his father was exercising in the yard, little David would join him and try to follow his movements. Most of the time, he would tire out while his father was only halfway through! Little David’s father told him that it was important for little David to know more about fires if he wanted to be a fireman one day. So he taught him about various types of fires, like electrical fires and chemical fires. He also taught David how to put out the various types of fires and what would happen if he used the wrong method to put out certain types of fires. Never did Little David or his father know that all this information would come in handy one day.

One Saturday morning, little David was alone at home with his mother when they suddenly smelled smoke coming from the kitchen. At the time, his mother and David were watching television in the living room. They both rushed into the kitchen and realized that little David’s mother had left some food cooking on the stove and had forgotten all about it! Little David’s mother rushed to grab a pail of water to put out the fire, but little David stopped her and insisted that she use a fire extinguisher instead. So little David’s mother grabbed the fire extinguisher from outside and used it to put out the fire. Then she called little David’s father to tell him what had happened. Within minutes, little David’s father arrived at home—in a fire truck, and with all his fireman friends! This was so exciting for the little boy. Little David’s mother told his father that the boy had stopped her from splashing water on the fire, and so she had used the fire extinguisher. Little David’s father and all his friends crowded around the boy and asked him: “Why did you stop Mummy from splashing water on the fire?” The little boy said: “Because the fire was started on the stove where Mummy was cooking. She was cooking with oil. If she had poured water on the burning oil, it would have spread everywhere!” The boy’s father and all his friends clapped and cheered at his answer. Little David’s dad was very proud of him, “That’s right! You did a good job – my little fireman!” he said. Then he lifted him on his shoulders and walked around the kitchen while they inspected the damage done by the fire. Then, the boy’s father and his friends brought him on a ride around the area in the fire truck before bringing him safely back home.

When Little David grew older, he would still talk about his father, but now he would also tell everyone the story about how he became a fireman for one day, and how that made his father very proud of him.