A short story about overcoming fear. 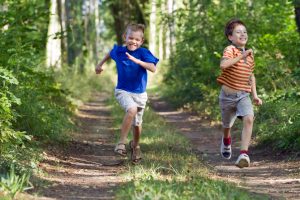 Joey was a school runner and he was going to have an important race against another school soon. He had to train hard to be prepared because his rivals were very fast runners. Joey decided that he would run everywhere that he needed to go. So during the day, he ran from one place to another as fast as lightning; the people who saw him running thought they were imagining things because they had never seen a child run like that all the time. After practising like this the whole morning and afternoon, Joey went into his house to drink water, rest, and think about the competition. He felt really prepared; no one could be faster than him. But even so, the boy was a little afraid because his coach had told him that children from other schools were very fast, maybe even faster than Joey.

As he was afraid, he approached his father and told him what he was feeling. His father hugged Joey and said: “I want to tell you a story. In my youth, I loved to ride motorcycles. I went to racing competitions and I was very good. My motorcycle was the best of all and I had amazing riding skills. The last time I competed, I had an opponent who was almost as good as me. His name was Julio Pérez; he was Colombian and he had learned to ride bikes through dirt and in the jungle, so racing on roads was very simple for him. This made me very scared.”

“I did not know what to do. I was really scared because I thought Julio was going to beat me. I told your mother this. At that time we were not married, we were just a young couple. She hugged me and told me that I was the best and I could win. Her words made me feel happy, but they were not enough to make me feel safe because I did not feel like I was the best. I was good, but I was not as good as Julio. When your mother saw that I had not calmed down, she told me that it did not matter if I won or lost, because she would always love me. That gave me strength for the race.”

“Yes, by an inch! But I enjoyed the race so much, that in the end Julio and I shook hands and became great friends!” Joey’s father then got up and hugged his son again.

“My son,” his father said, “if you win or lose, your mother and I will always love you. For us, you are already a champion. We have been to all your competitions and you always try your best. If the other children do better, you should just try harder and beat them next time. But always remember that whether you win or lose, you will always have your parents there supporting you.” This made the child feel calmer. He thanked his dad and hugged him tightly. After this talk, he was able to practice more calmly and run so fast that his legs seemed to have wings.

The next day, in the competition, Joey realized that it was true that the children from the other schools were also very fast. But he had something special; he had the love of his parents, which gave him enough energy to accelerate in the last moments and win the race. Joey shook hands with the second and third place children, thanking them for such a fun race. His parents hugged him with a lot of affection, saying: “Win or lose, you will always be the best for us.”

After that race, every time Joey felt fear, he thought about his parents, and that gave him the energy and strength he needed. He has run many races since that day. Some he has won and some he has lost, but he has always felt like a winner in the end!