This is an original short story about a turtle who followed his dreams. 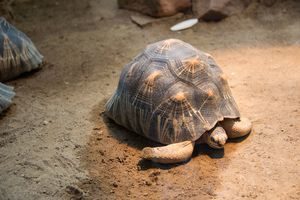 The life of a turtle is usually very quiet and calm. Turtles walk slowly from place to place and they take their time to do things, even to talk. It is a slow and long life that they lead. But this did not work for a turtle named Pierre. On the outside, Pierre was a little turtle, like any other. But on the inside, he was very different. Turtle sports that required a lot of thinking and sitting for long periods of time bored him. He wanted to do something else. His father was a chess champion. His grandfather was also a chess champion. Everyone in the family hoped that Pierre would continue the legacy and become a chess champion too, but he wanted to do something else—something faster. But for a turtle, it is hard to be fast at anything. For example, Pierre knew that he could never be as fast as a rabbit, or a greyhound or a horse. In addition, those animals do not have to carry the weight of a shell around with them. Pierre’s shell was very comfortable and cosy but it was also very heavy.

One day, Pierre was walking down the street, thinking of solutions to his problem. He tried to get into cars so that he could drive them fast, but thanks to his shell he did not fit in any of them. He tried to get on a bicycle, but his tail would not let him sit down. It was a very sad time for Pierre, who wanted to experience speed but always had to go slow. Then he saw an advertisement: “Roller skates at half price!”

“Roller skates? What are they?” Pierre thought as he approached the store. What a surprise! The owner was a turtle who moved fast from side to side as if he were some other animal, not a turtle. Pierre was amazed and could not help but look at him with surprise.

“Sir,” Pierre asked, “how is it that you, being a turtle, can move so fast? Isn’t speed only reserved for the other animals?”

“Oh” replied the turtle “I am fast thanks to my roller skates, which are shoes with wheels underneath!” Pierre looked down at his feet.

“I never thought that someone like me could move fast.”

“Oh, son, never think you cannot do something. Sometimes things are harder for you than for other animals. Greyhounds and horses do not know what it is to be slow; if they had to spend their whole lives walking slowly they would be very upset. But because of their speed, the humans also catch them and make them run races and go hunting. We are slow by nature, so we appreciate being able to be fast. But because we are slow, the humans don’t catch us and make us go racing or hunting.” Pierre was impressed by the other turtle’s speech. There were some roller skates in the shop and Mr. Turtle brought them for Pierre to try on. At first, he could not keep his balance, but then he began to move quickly from one side to the other. It was Pierre’s dream.

Mr. Turtle was glad that Pierre could get the hang of skating so quickly. “Never stop yourself from chasing your dreams. If you want to be fast, then find a way to be fast. It’s fine if you want to be slow later on too. You can be what you want to be, no matter if you are a turtle that wants to be fast or if you are a horse that wants to walk slowly” said Mr. Turtle to Pierre, who was very grateful for the conversation with Mr. Turtle. From that day on, he went to the shop every afternoon to visit him. He learned to use roller skates to perform tricks and won races with them too. That way, he fulfilled his dream to be fast. And there was never a turtle faster than Pierre.