This original short story is about a little boy who loves peace and quiet. 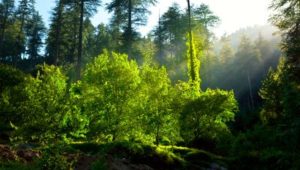 Julian was a boy who lived in the city. But he did not like the city at all, because it had a lot of loud noises, cars and buildings. In front of the window of his room, there was an apple tree in which red and blue birds sang often. The child loved to hear the little birds sing. When he woke up every morning, the first thing he would do was open up his bedroom windows and look out to see the birds and listen to them singing. On many occasions, Julian would not be able to hear the birds singing because some loud car or truck would be passing by. This always bothered Julian.

One day, Julian asked his dad if there was any place where he could listen to little birds singing that was calm and quiet. After thinking for a while, his father had an idea: “I know what we can do, Julian, we’ll go camping tomorrow. When I was a kid like you, my father took me to a place in the woods, I know you’ll love it.” The next day they packed everything they needed to spend a weekend in the forest. After a long journey, during which Julian fell asleep, they arrived at a place far from the city. It was a place where Julian could not see big buildings anywhere; he could only see trees as tall as skyscrapers. In the trees, there were not only red and blue birds but multicoloured ones—some large, some small, some singing and some not. The birds were singing all sorts of songs he had never heard before.

After unpacking, dad said to Julian: “Come, son. I will teach you how to fish.” They both had very good fishing rods. Dad put some bait on the hooks and explained to Julian the secrets of fishing: “You have to be quiet, son, very quiet—so quiet that the fish will think you’re not there. That’s the secret of fishing; keep quiet and calm,” the man said, whispering. The boy laughed a little, trying not to make noise and said “Dad, that’s exactly what they do not do in the city.” Hearing this, his dad laughed quietly too. After a while, both managed to catch some fish for their dinner. In the evening, they prepared a fire to cook the fish and keep themselves warm. While sitting in front of the fire, Julian looked up. He was surprised to see so many stars in the sky.

“All these stars can also be seen from the city” said Dad “but only if there was less much pollution in the air.” The boy thought that those bright points above him looked very pretty. That night, Julian fell asleep thinking about how much he liked being in the woods, because everything was quiet. He could see the beauty of trees and flowers. He could hear the birds singing, and he could listen to the river flowing all day. That night, the boy rested a lot. He had never slept so well. The weekend ended quickly. Time flies when you are having fun. Julian and his dad walked inside the woods, fished again, and spent a lot of time just talking around the fire. That weekend was magical for both of them. On the way home, Julian stayed awake because he wanted to know how to get to the quiet place on his own when he grew older. Since then, Julian and his father have always tried to visit the forest every once in a while. Julian loved the peace and quiet of the experience and Julian’s dad loved spending time with his beloved son, with nothing to interrupt them.