This story is about Sally’s father. 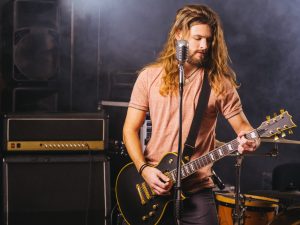 Sally admired her father very much. Sally’s father was not like others, he had long blonde hair and played the guitar. Her father was a rock star. He had his own band. Uncle Roger also played in the same band. Uncle Roger played the bass. The bass sounds like “Dirn! Dirn! Dirn!” Uncle Roger’s bass was blue, that’s why it was called Baby Blue and Uncle Roger would hang it on his shoulder with a blue strap. Uncle John was also in the band and he played the drums. There were many drums and cymbals in the drum set which Uncle John beat with wooden sticks called drumsticks. The drums sound: “Tuh Pha! Tut Pah! Tu Tpah!” Uncle John’s drum set was black. The drumsticks were black too. He called it the Black Night. When Uncle John went to perform, he always wore a special black bandana because he thought that using it would bring him luck at every concert. This was true because when he played, his arms moved so fast that he seemed to have eight instead of two, almost as if he was an octopus.

Sally’s father’s name was Sam. He sang and played the lead guitar. He wrote songs for Sally because she was his only daughter and he loved her very much. Sam wrote these songs and then sang them to Sally before going to sleep. Sometimes these songs were very long and sometimes they were short, like this one:

“Go to sleep, my little girl
Dream things out of this world”

Sam had a voice that was very loud. It was so loud that when he spoke, everyone could hear it throughout the whole house. When Sam was on stage, he moved his head and made his yellow hair fly up and down as he sang while playing the guitar. The guitar sounded “Wha! Wha! Wha! Wha! Wha!” and Sally’s father loved that sound. Sally loved that sound too! Sam’s guitar was red. That’s why it was called Ruby Red. He would hang it with a red strap on his shoulder.

The band was very good and Sally was proud to have a father who was different from the others. The other members of the band also had children. Uncle Roger was Robert’s father, who was older than Sally. Uncle John was Jonathan’s father, who was about Sally’s age. When their parents gave a concert, the three children went to see them and they rocked with them on stage. The one who liked the music most was Sally because sometimes she played the guitar like her father. Sometimes she also played the drums like Uncle John and sometimes she also played bass like Uncle Roger. Sally’s mother, Sarah, was not surprised by her daughter’s talent, so she gave her a pink guitar. Sally called it Pinky Pink. She learned to play the guitar quickly and every night, before going to sleep, Sarah would hear Sam and Sally sing from the girl’s room:

“Go to sleep, my little girl
Dream things out of this world.
Sing along
To this song
Sing this song for me
Because you make me happy”

“She’s like her father,” was what Sarah thought with a smile on her mouth when she heard this beautiful song for the first time—and she was right!