Lucy And The Cat

This is an original short story about a friendship between a little girl and a cat. 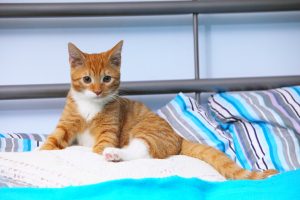 Lucy loved to draw more than anything else. Lucy would often draw her mom and dad, her teacher, and her friends. Other times she would draw the trees, the clouds, or the sun. When she felt like it, she would even draw the neighbours who walked in the street. But what Lucy liked drawing the most was a little cat who visited her garden every evening to sleep under the shadow of an apple tree that was there. Lucy knew that the kitten visited the garden every evening, so she always had food prepared for him. She placed the food in a container with a little tuna, and in another container, she would pour some milk. It was a very small kitten—so small that he seemed to be a child, just like Lucy. When the girl saw him from the window, she drew him. He was orange with black stripes, like a tiger. That is why Lucy called him Tiger. The little girl’s parents knew that she liked to draw the cat since they had seen her drawings stuck to the refrigerator with a magnet.

“Who is that cat, my love?” her mother asked when she saw those fine drawings made by the girl with such care.

“It’s a kitten that visits our garden in the evening, mom. He was sleeping in the shade of the apple tree; I saw him from the window and I drew him because he looked so beautiful and calm.” said the girl.

“What do you think if we put out some food there for him in the mornings too, so that he will come every day and more often, then you can draw him? These drawings you made of him are the prettiest you have ever made” her mother said,

“I’d like that,” replied Lucy. So they began to put food out every morning. Tiger noticed this, so he approached punctually every morning and evening to eat what Lucy and her mother had left for him. The little girl felt that the cat was her pet, but she was afraid to approach him. She did not know him and it made her think that if she approached the little kitten, he would be scared. But still, she kept putting food out for him every day. One day, her mother asked her why she did not go out and play with the kitten. “Because I do not want to scare him, Mom, and I love him so much that I’m afraid that if I say hello, he will never come back and I will not be able to draw him again,” the girl told her mother. This made her mother think of some way to approach the kitten without scaring him. But she could not think of anything, and things stayed the way they were.

One evening when Lucy wanted to paint Tiger, she realized that the kitten was not frolicking under the shadow of the tree as usual. This saddened her. But suddenly something unexpected happened; the cat appeared at her window—meowing loudly! Lucy opened the window, letting the little animal enter. The cat entered the room and lay down on the carpet as if waiting for the girl to draw him. So that’s what the little girl did. After that, Tiger started to live with her in the house and the girl could draw him as much as she wanted because he became a great friend.