Going To The Beach

A short story about a boy’s trip to the beach. 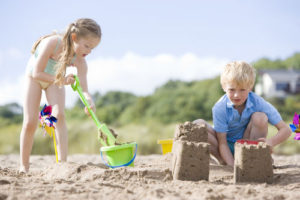 In a very big place, full of buildings as tall as giants and people of all colours and shapes, lived Daniel, a child with round glasses, golden hair and brown eyes. Dad and Mom loved him very much because he was very affectionate and always behaved himself. Once, Dad was very excited when he arrived home.

“I have good news,” Dad said excitedly, “my boss has given me a vacation!”

“Finally!” said Mom, jumping up to hug him, “you are a hard worker, you deserve it.”

“Daddy,” called little Daniel, “where shall we go?”

“That’s a good question,” Dad said with a smile. The family realized that there were so many options that they did not know which one was the best. Mom wanted to go to the mountain, but it was very far away. Dad wanted to go see a basketball game, but there were no tickets left. Then after thinking for some time, Daniel had an excellent idea. “Let’s go to the beach!” he said.

“I’m a funny Dad, and I like to move my skeleton, So much that sometimes my back hurts!”

“That does not rhyme!” complained Mom, and Daniel while laughing loudly.

“But it’s the truth,” said Dad with a smirk. When they reached the sea, the place was beautifully quiet and peaceful; children ran on the shore and Daniel was excited to make new friends.

“Can I go play with those other children?” Daniel asked excitedly.

“That’s okay, but do not go far,” said Dad, sitting on a beach chair.

“But before going out to play in the sun you will need to put some of this on,” Mom said while taking out her sunscreen from her purse, “so that my little boy does not burn his skin.” Mom put sunscreen on Daniel’s shoulders, on his cheeks, his nose, his forehead and then on his tummy, which gave Daniel many tickles; he did not stop laughing.

“Very good, very good. Come back soon to eat,” said Mom. Daniel approached the other children who were building a sandcastle. When he walked up to them, they looked at him curiously. Daniel swallowed hard and wanted to run. When he had seen them having fun, he had not thought about how hard it sometimes was to make new friends. But as nobody said anything, a girl who was in the group stood up.

“Do you want to play with us?” she asked excitedly.

“Take the blue bucket,” said another child “and help us to make the tower.” All the children started to play together. That day, Daniel had a lot of fun with his new friends and with his family.