This short story is about a boy named Manu. 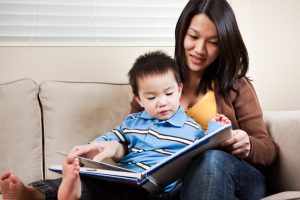 The world is a very big place, and nobody has seen every nook and corner of it. The world is so big and so mysterious that humans can never know everything there is to know about it. Not even grandparents know everything about the world, but they do know a lot more than everybody else. There are some people who want to know as many things as possible even when they are little kids. But since they cannot read yet, they ask the grown-ups around them questions all the time like, Why are the leaves of trees green? Why do the flies fly? and Why do dogs walk on four legs? Manu was one of those children. Reading was very difficult for him, which is why he always asked his mother things. His mother took him to school on the bus. It was a long way, and after the bus ride, they had to walk for some distance. During the whole journey, little Manu would ask his mother questions. Mom sometimes struggled to answer all the questions the child asked because sometimes she did not know the answers!

Even though Manu was a very curious child, he had a lot of difficulties learning to read. The other children in his class were already reading but he still could not do it. However, he liked stories and poems much more than his friends.

“Manu is strange,” said the other children, “he likes books, but he cannot read!” Manu liked stories a lot, so he watched a lot of television. In particular, he liked the shows on television where cartoon animals like dogs told stories about other animals. The boy thought it was strange that a dog had a voice and often thought to himself: “But there are a lot of dogs in my house and none of them talks to me! I really would like to know what they think.”

The child liked animals very much, so he sometimes followed his mother to work. His mother was a professor at a university where she taught her students about animals and their habits. Sometimes they went to places like lakes where many fish lived, so Manu could see them swimming through the water. Manu enjoyed watching big fish and small fish moving from one side to the other, swimming and playing. Sometimes they went to fields where cows were grazing with their little calves or mares with their foals. Manu liked very much to see the colts with their moms because he also went hand-in-hand with his mother. Sometimes, the farmers even allowed him to ride on the ponies. Manu loved riding on ponies and looked forward to such days. And finally, there was a special place where thousands of little chicks were. Every time Manu went, everyone knew what was going to happen. The child entered and ran between them. The chicks jumped on him and played with him because he was a very good little boy and the animals could sense that, so they trusted him.

Manu liked animals so much that he wanted to be a veterinarian one day. It was a good thing that even if Manu’s mother did not know all the answers to his questions about everything else, she would always know the answers to his questions about animals! Manu’s mother hopes that Manu will learn to read soon, otherwise he will not be able to become a veterinarian one day. So she spends a lot of time at home teaching him how to read. Let’s all hope that Manu learns to read soon so that his dreams can become reality one day!