The Alien In The Box

A unique and original story about John’s special discovery. 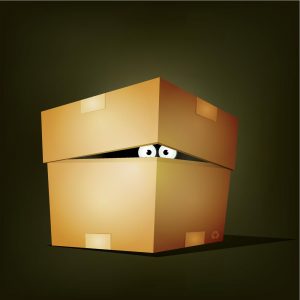 When John found the box in the field, he could not resist his curiosity; he wanted to know what was inside it, so he picked it up and opened it to peek inside. What he saw shocked him. It was a strange little creature, the like of which John has never seen before in his life. It was furry, with a small head and long slender arms and legs. The creature looked at him and seemed to smile. In fact, the creature seemed to have a permanent smile on its face.
John knew what he had found. He had found an alien. Earlier that day, he had seen many policemen running around the area. John thought to himself that someone else must have seen the alien and called the police in fear.

“But don’t you worry my dear furry friend, I will not call the police on you. I bet you hid in this box to stay safe and not get caught” said John to the little animal. He decided to call it “Fur.” John picked up the box with the alien in it and carefully tucked it under his arm. He then decided to walk home. As he was walking home, he thought about what he was going to do next.
“I will keep Fur under my bed. I think he will eat cookies and drink milk for food. Or is it a she? Anyway, Fur has not made a sound since I found him. I guess he is a really quiet alien. That should make it easier to take care of him and keep him out of Mom’s sight.” John continued making plans on the long walk home.

When he reached his house, he carefully tucked the box away under his bed. Before that, he dropped some cookies into the box so that Fur would have something to eat. In the house, he heard his parents talking: “I sure hope they caught them all…send him to jail…” John could barely make out what his parents were talking about, but it sounded like they were talking about Fur and sending him to prison! John panicked and decided that he would not mention Fur to his parents. He quickly had his dinner and rushed upstairs with a glass of milk. Once he was safely in his room, he fed Fur the milk. Fur had already eaten the cookies. The smile was still on his face. Fur grabbed onto John’s fingers and soon fell asleep.

“What a cute little alien!” thought John to himself, “Why does anybody want to catch you and put you in jail?” The next day, John woke up early and went down to the kitchen for breakfast. He wanted to grab more food for Fur as quickly as he could, so he ate his breakfast in a hurry and then ran up to his room with a cookie in his pocket and a glass of milk in his hand. Then he pulled out the box and fed Fur the cookie and the milk.

“John! What have you got there?” he heard his father’s voice ring out in his room. John was startled and turned around to see his parents in his room. Tears welled up in his eyes. He knew they would call the police. John’s mother knelt down beside him and patted him on his head saying: “Just tell us the truth baby boy, we knew something was fishy when you came down early for breakfast on your own!” John told them about the box and Fur, and how he wanted to take care of him. He also told them how he had wanted to tell them about Fur last night but he had overheard them talking about catching Fur and putting him in prison. John’s parents looked at each other and laughed. “Silly boy! We were talking about a local headline yesterday. It seems like someone in the neighbourhood was smuggling unique animals as exotic pets and the police had tried to catch him, but he let all the animals in his house loose in the field nearby! Your little friend over there was probably one of his pets!” John said “I think that is unlikely Mummy, this is not an exotic pet. This is an alien from outer space!”

Daddy took a long hard look at Fur and said with a smile “My boy, that does look like an alien, but he also looks very much like a baby sloth.” John looked at Fur and realized that his father was right. He was holding a baby sloth, not an alien. John looked up at his parents and asked “Can we keep him?” His parents looked at John and said “Sure, why not? He seems to love you already. We will need to bring him to a vet to make sure he is safe and to learn about how to take care of him though.” John was overjoyed! He hugged his parents and kissed little Fur saying, “Welcome to the family!”