This is a story about a boy and his grandfather. 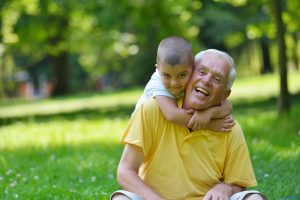 In a village in a small country, there lived a boy named Manuel. He was the first son born to his parents and for that reason, they doted on him very much. The rest of his family was very large and he had many uncles and aunts; he had two grandmothers and a grandfather. Manuel and his parents lived near a couple of his cousins; two of them were Manuel’s age. However, Manuel did not play much with them, because he preferred to spend most days with his grandfather, Tomas, who was his mother’s father. He went out with him in the morning and returned with him to the house at lunchtime.

Grandfather Tomas was a farmer, who cultivated many types of vegetables and reared a lot of animals on his farm. There were cows, ducks, pigs, sheep, chickens, and roosters but Manuel’s favourites were the chicks because they were so pretty and cute that they looked like toys. That was why he like to sit nearby while his grandfather collected the eggs from the chicken coop, so he could then take a small chick and play with it. He had to be very careful because chicks are very small and fragile. Manuel said to them: “Piu! Piu!” trying to talk to the chicks, and his grandfather would laugh at Manuel when he did that. After collecting the eggs, grandfather Tomas went to the hogs and put food down for them. He also checked that they were well, and if it was a very hot day, he would water them down for a while. Manuel liked to watch this because the pigs always seemed very happy and they raised their heads as though they were smiling, then made pig noises that the little boy imitated, laughing: “Oink! Oink!”

When it was mango season and the day was good, Grandpa Tomas climbed up the big mango trees that were everywhere on the farm. The mangoes were so big that they seemed to be Manuel’s size, and the boy was so excited that he started jumping with joy and eating the fruits with great bites. Manuel thought that mangoes were the most delicious thing in the whole world. When he ate his mango he would fill his whole face with fruit. His grandfather would take his grandson to a nearby stream where he would wash his face and hands so that Mama would not be angry when she saw her little boy full of fruit and dirt. Since Manuel was a good boy, he always stayed very quiet when his grandfather was cleaning him up; then when it was time to go home, the boy took the opportunity to ask his wise grandfather the most interesting questions. “Why do trees grow upwards? Why are shrubs green and not blue?” His grandfather answered with great patience all the questions that his grandson posed to him and sometimes he was surprised that his grandson was asking him questions he had never thought of before!

When they got home, they were always received by mom and grandmother with kisses and hugs. Manuel would ask his grandfather to promise him that he would take him out again the next day. For Manuel, his grandfather was the best person in the whole world!