A short original fable about an elephant growing up. 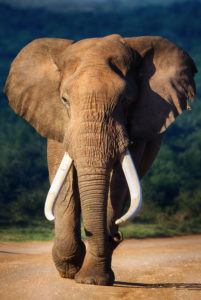 It is said that all elephants have a very good memory. In fact, they can easily retain an entire book in their heads, all the dialogues of a movie or all the lyrics of the songs on an album. But people do not know that an elephant is not usually born with a good memory. In fact, an elephant develops it with time and study. To develop their memory, elephants must go to school. But the schools they go to do not look like the ones we know. They go to schools on the banks of the river where they drink their water. There is an older elephant who lives around there, who teaches the younger elephants how to remember things. This older elephant’s memory is excellent! But, as it happens with humans too, sometimes there are a few baby elephants that are not very good at classes. Sometimes this is because they are easily distracted or because they simply find it difficult to concentrate.

Peter was one such elephant. He was a small white elephant. Peter’s parents had the best memories in the herd. In fact, they remembered hundreds and hundreds of complete books, songs and movie dialogues. They knew a lot of games too. So you can imagine that they were very intelligent. Therefore, everyone thought that Peter would be very intelligent and have a very good memory just like his parents. Unfortunately, baby Peter was not able to learn very quickly. His parents always asked him to learn things, but the little elephant could not.

“That it is very difficult!” he often said.

At school, the teacher told him to pay more attention to the classes. But little Peter really did not care about what was going on in school. Nobody in school ever talked about books that he liked, nor did they listen to his favourite type of music. Peter found it difficult to pay attention to things going on in school. However, when he was in his room, he read many books about adventurous elephants. His favourite was the one about Ernest Elephant’s adventures. Ernest Elephant was an adventurer who easily climbed Mount Kilimanjaro. Peter also listened to music with his headphones. His favourite singer was Louis Elephantstrong who played the trumpet with his big trunk. His songs were very funny and when everyone was asleep, little Peter danced to the rhythm of the trumpet in the privacy of his room.

So the little baby elephant actually did have a very good memory, he just did not like learning things from school because he did not like what was being taught, since they seemed boring to him. One day in class, the grand old teacher told all the students that they had to read and learn an entire book about the Ernest Elephant and how he climbed Mount Kilimanjaro. Peter could not believe what he was hearing; they would finally be doing something he liked! He took out his book of Ernest Elephant, and he did not need much time to memorize it. He was the first of the class to finish, and when he came to the front of the room to answer the questions, his teacher was very impressed because she thought that Peter never paid attention during class. But that day Peter showed everyone that he was smart too.

When his parents heard that the little baby elephant was so smart, they were very happy, buying him more books about Ernest Elephant such as his adventures in Paris, his adventures in the African Savannah, and about when he was a fisherman or when he was a soldier. They also bought him Louis Elephantstrong records, even listening to the music with their son. Of course, baby Peter learned all of these stories easily, showing everyone that he was really smart. But most importantly, Peter’s parents told him that whether he was smart or not, they loved him just the same. They just wished that he had said something about what he liked sooner, so they could have provided him with his preferred books and music earlier!