A short story about being yourself. 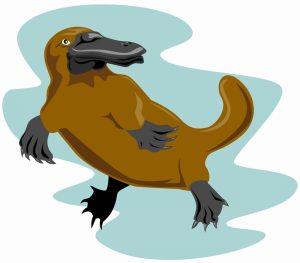 Brad the Platypus was upset. He was upset because he had a beak, but the ducks in the pond didn’t want to be his friend.

“What do you need webbed feet for? And why do your webbed feet also have claws? You are strange! Stay away from us!” the frogs would say to him. So Brad played by himself in the pond all day. There weren’t any other platypuses around to play with either. He was alone and miserable all the time.

One day, Brad met a snake. Snakes usually eat platypuses but this one was not particularly hungry that day. The snake asked Brad, “Why are you upset all the time?”

“Because the ducks say I have a beak when I shouldn’t,” said Brad. The snake thought for a while then said: “But your beak is special. It’s much stronger than a duck’s beak, isn’t it? Perhaps they are jealous?”

“Maybe, but the fish say I am smelly because I have fur like a bear. I know they hate bears, but they have such nice shiny scales and say they are better than me,” Brad said. The snake thought about this for a while and said: “But the scales of fish are weak and get scratched easily. Scales offer no protection against the cold. In fact, the shiny scales make them look so good and delicious to eat. That’s why the bears catch them all the time, even though there are easier animals to prey on. Why would you want scales instead of fur?” Brad was silent. He had never thought about it that way. The snake had made a good point. Then Brad spoke again “But the frogs say I am strange because I have webbed feet with claws and I can’t jump as high as them, nor can I swim as fast as them!” The snake was silent for a while, then he spoke: “You silly platypus. The claws on your webbed feet make them immensely strong—way stronger than a frog’s feet would ever be. This allows you to move through water, mud and on the ground. The frog will struggle to move around most terrains. It is true that frogs can jump high, but you can go wherever a frog can go without jumping; it might just take a little longer. But there are lots of places you can go that a frog can only dream of because a frog is not strong enough to pull itself out of thick mud.” Then the snake said: “Look at me. I have thick scales, not shiny scales like the fish. I don’t have a beak either, instead, I have a mouth that cannot chew food. I don’t have webbed feet with claws. In fact, I have neither claws nor feet. Yet here I am, happy as always, slithering around and exploring the pond and the rest of the forest. What others think of me is not important. Perhaps they keep their thoughts about me to themselves because I have a mouth full of venom, but I know what many of the animals who see me slithering around are thinking anyway—and it mostly isn’t anything good! But it does not bother me in the least.”

Brad looked at the snake and thought about everything he had just said. It would be hard to ignore the things that the other animals were saying, but he realized that there was no animal that was “better” than any other animal in the forest. Every animal was wonderful in its own way—including himself. It was too bad for the other animals if they were not able to see it. But he decided that he would not let the words of other animals bother him from that day on!